As an 80s baby I grew up watching the holiday movie, Home Alone, almost every single Christmas season. I have continued that tradition now into my adult life, but I look at the movie with a different lens as an engineer/adult. One of the things that stood out to me is the feasibility and complexity of the booby-traps that Kevin sets in the movie. In today’s blog I am going to look at one of my favorite traps in the movie, and if it is even remotely reasonable through using Altair SimSolid to simulate the booby-trap.

One of my favorite traps that the main character in the movie, Kevin, sets, is he places an electric heater on his front door. The doorknob subsequently heats up significantly, so that when anyone puts their hand on the knob it will burn them instantly. Eventually it leads to the point where the one burglar, Harry, places his hand on the front door and it burns him instantly, leaving a big M mark on this hand.

As hilarious as the gag was portrayed in the movie, I was left with the question, could the doorknob have gotten that hot in a reasonable amount of time? Thus, I decided, I wanted to simulate this exact scenario, to determine if the doorknob could heat up to a hot enough temperature within the time parameters Kevin had.

Altair SimSolid To the Rescue

Altair’s SimSolid is a finite element solver that enables users to run and solve structural simulations accurately and quickly. I decided to approach solving this problem in SimSolid, because it can solve scenarios quickly, and it has a dedicated thermal transient solver. I could have also solved this problem with Altair OptiStruct or Altair Acusolve. However, I wanted to solve the problem very quickly, which is one of the strengths of SimSolid.

My first step was to create the doorknob. I did a few google searches and found some basic dimensions for a front doorknob. Note, I do realize the doorknob I am simulating will not be identical to the one used in the movie, but I do not think the geometry differences will influence the system significantly. I created the doorknob CAD model using Altair Inspire, including the iconic M on the outer doorknob!

After creating the model in Altair Inspire, I exported the CAD model directly into SimSolid and then specified the thermal transient settings. In the movie, Kevin only has a few hours to set his traps, so I keyed in a time of 7200 seconds into SimSolid. Additionally, the movie takes place in Chicago around Christmas time, so I keyed in an initial temperature of 40 F which aligns with some typical Chicago temperatures. 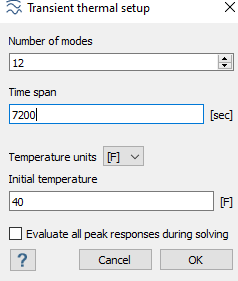 In the movie the thing heating up the doorknob, is an electric coil heater. After doing a few google searches for an electric coil heater, I found that the average thermal output of these devices can range between 200-1500 watts. As the movie is nearly three decades old, and I am not certain of the exact model Kevin could be using, I assumed a thermal output of around 550 watts. In SimSolid, I can directly apply thermal output on surfaces or volumes, and in my case, I apply it directly on the back surface of the doorknob. This surface represents the interior where Kevin hung the electric heater. 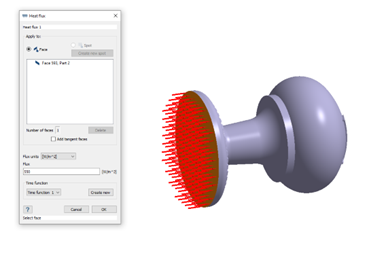 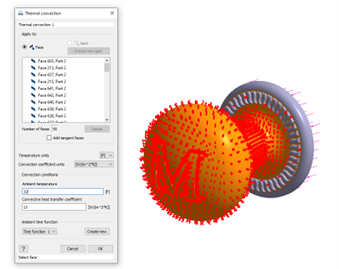 SimSolid dynamically highlights all the faces where air would be interacting on the surface. I apply a convection coefficient that reflects the outer air temperatures, and then hit apply. The last step is to apply a material property to the doorknob, in my case I am going to assume the doorknob is cast iron. At this point my analysis can be run. With SimSolid, I do not need to physically mesh the model as the SimSolid solver is a meshless based solver. As a result of the meshless solver, I solve the analysis in a fraction of the time.

With the transient results viewer in SimSolid, I can understand directly what happens to the doorknob very quickly. In my case I can animate the doorknob heating up, and I can quickly see that the doorknob is heating up how I would expect it to.

Transient Temperature Profile of Front of Doorknob in SimSolid

As you can see above, the doorknob reaches a temperature of around 900 degrees within 1000 seconds. The temperature eventually reaches 1000 degrees within two hours’ time, which is more than ample to cause a significant burn to Harry! Yahoo, SimSolid proves that at least this part of the movie is feasible. Whether or not the rest of the movie is feasible, is a question for another blog!

If you have any further questions on Altair SimSolid or any other Altair solution, please reach out to us here at TrueInsight. Lastly, I wish you and your family a Happy Holidays from everyone here at the TrueInsight team!

When running a metal casting simulation using Altair Inspire Cast, the model needs to be broken up into simple pieces th...

When would I use Inspire vs SimSolid vs SimLab? Altair has many capable tools in its structural engineering suites, and ...

Altair SimSolid is a structural simulation that runs its calculation based on original CAD geometry. The geometry does n...