For those of you unfamiliar with axe throwing, it involves a competitor throwing an axe at a target, attempting to hit the bullseye as close as possible. Recently, my TrueInsight colleagues and myself decided to give this activity a try. After a few throws with my colleagues (none of us lost any limbs, thankfully), I realized that the most accurate throws were throws with uniform motion rather than aggressive force. I then thought if I could understand the proper launch angle, I could obtain an understanding of the best way to hit the center of the target each time. Unfortunately, I did not have expensive motion capture cameras at my disposal to understand good launch angles, but I did have the power of Altair Motion Simulation to simulate this exact scenario! Therefore, in today’s blog I am going to show you how you can utilize Altair’s Motion Simulation tools to optimize kinematic scenarios. 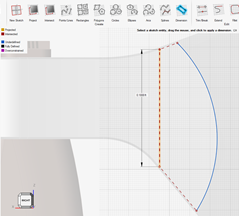 Within the Altair simulation suite, there are numerous kinematic motion simulation tools and solvers. For our axe throwing scenario we are going to utilize Altair Inspire Motion and Altair MotionView to set up our motion simulation. I wanted to create a baseline motion scenario first, before moving into optimization, thus I started out with Altair Inspire Motion. Since I created my CAD model in Altair Inspire, all I had to do was to then click on the motion ribbon and apply the kinematic boundary conditions for our scenario. In our case the primary variables are launch angle and exit velocity of the axe. Therefore, in our case I applied an angular velocity that would allow for about one rotation of the axe prior to hitting the target (Figure 2).

Through motion results (Figure 3) I can view the axe trajectory through adding a dimension and see how the axe moves towards the target. Through looking at my results, I can see that the axe hits the target but is not near the bullseye. Thus, if I want to optimize my motion for a variety of launch angles, I will need to run an optimization. Altair Inspire Motion does have the ability to run optimization, but I will need some more advanced optimization techniques. Therefore, I am going to utilize Altair MotionView with Hyperstudy to run the optimization scenario for the best launch angle. 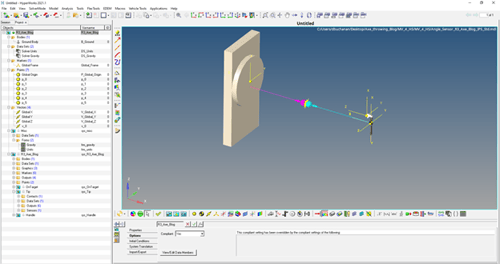 After importing my model into Altair MotionView (Figure 4), I can apply numerous advanced boundary conditions that are not available in Altair Inspire. In our case I want to create a variable for the different launch angles and utilize that variable for an optimization with Altair Hyperstudy. I can create a linked variable for the launch angle by clicking on the point of the axe (shown by the red arrow in Figure 5) and then specifying it as a condition for optimization. 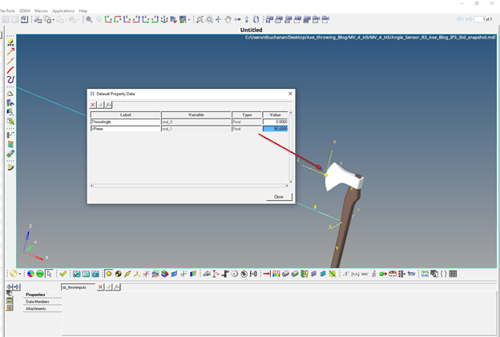 After this variable is created, I can then run an optimization with the use of Altair HyperStudy through adjusting the launch angle variable I created in Altair MotionView (Figure 6). In my case I want to see the effect of the launch angle ranging from 0-360 degrees from the initial point location.

After keying in my variables I can run the scenarios directly from the Altair Hyperstudy interface. I look at the output in Altair Hyperstudy and see that the optimum scenario for hitting the target at the bullseye will be 7 degrees from the starting position with the same initial velocity I have applied (Figure 7). With a throwing angle offset of about 7.5 degrees, it will only be .15 inches from the Bullseye. If I wanted to run additional scenarios to get closer I could, but .15 inches is close enough for me! With overlay postprocessing, I can overlay all of my Altair Hyperstudy results to see which axes were close to the bullseye and which were far from the center of the target (Figure 7).

Through the power of setting up the problem with Altair Inspire Motion to optimizing the motion solution with Altair MotionView and Altair Hyperstudy, I was able to determine the optimized launch angle and velocity all with a few mouse clicks. For the next group outing I am ready to hit that bullseye consistently, watch out TrueInsight team! If you have any additional questions about how Altair’s simulation tools can help you optimize your designs, please reach out to use here at TrueInsight!

CAD users love simulation tools that are built into their CAD design tool. This is for many reasons, but one main reason...

By now, most users know that topology optimization is a powerful design method that involves finding the optimal layout ...